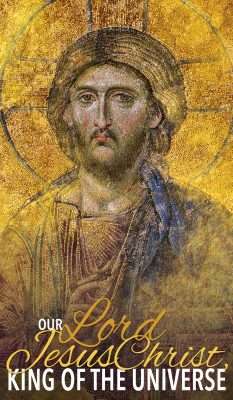 Most of us remember learning about metaphors in our fifth grade English class. We learned that the use of metaphors is only meaningful when the metaphor comes from a common knowledge and the shared experiences of people. So maybe for us the metaphor Christ the King should be changed. Perhaps we should say, “Christ the President” or maybe “Christ the CEO” or perhaps from our popular culture we could say “the awesome Christ.”

We can argue that the title “king” is a political entity and an unpopular image in a few countries of the world today. Consequently, it is no longer a useful metaphor for twenty-first century people like you and me. It’s outdated. But I do know that it is highly unlikely, that there is anyone in America, above the age of five, who doesn’t know who a king is.  If you check out the movies and books that parents show and read to their children, you find that there is “The King of Dragons,” “The King of the Forest,” and “The Lion King.” Some of us stop for lunch at Burger King.

I don’t think the real issue is whether or not we call Jesus, “Christ the King.” But rather the issue is trying to follow and practice what Jesus stood for at a time that is not all that different from the world where we live today.

Caesar’s empire was based on power that was exercised through violence. The peace offered by Caesar was a false peace built from repression, suppression, oppression, and cruelty. The Roman religion worshiped gods that were merely personifications of the emperor himself. And they worshiped emperors whose power came through their ability to crush any alternative form of power. Peace was an illusion, merely a time of quiet created by the power of the Roman soldiers to punish and quiet all dissenting voices.

The kingdom offered by Jesus was a true alternative to the kingdom demanded by Rome. The kingdom of Jesus is built on love and kindness, whose goal is justice and whose end is true peace. In this kingdom, the first are last and the last are first, the privileged and powerful are brought low, and the weak and powerless are raised up. The poor, the hungry, those who mourn, and those who make peace are blessed while the well fed, the comfortable, and the violent, are doomed to lives of miserable existence. Those who are blind are made to see, and those who can see, don’t. The unclean are made clean, the outcasts are included, the guilty are forgiven, and the lonely are embraced. This is the alternative kingdom that Jesus offers for those who would accept and follow him not as elected leader or a president, but as King.

In my fifth grade English class, I also learned that a predicate adjective is a word that comes after a verb to emphasize the nature of a noun or pronoun. In the sentence, “The woman is good.” The adjective “good” tells us the very nature of the “woman.” This simply means that after a little thought and some personal reflection most of us somehow know that Christ is King who invites us into his kingdom of care and love.