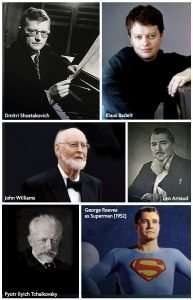 John Williams’ film scores portray heroic characters from Star Wars, Harry Potter, and Superman, and his Olympic Fanfare and Theme, composed in 1984 for the Los Angeles Olympics, continues to be played on Olympic telecasts. Klaus Badelt composed music to underscore the exploits of the Pirates of the Caribbean. Russians Shostakovich and Tchaikovsky memorialized historically important events in their homeland: Shostakovich wrote Festive Overture in 1954 to commemorate the October Revolution, and Tchaikovsky penned his 1812 Overture for the dedication of a cathedral in Moscow that celebrated the 70th anniversary of Russia’s victory over Napoleon in the War of 1812.

Concert is free. Donations are requested.