Featured at the Aim Higher Foundation’s Night of Light celebration, the video “Isaac’s Blessing Bags” is a look at one of the more than 1,300 Aim Higher Scholars and his impact on the local community. The Foundation made this video about Isaac for the event.

For its Advent 2017 service project, Community of Saints helped those in need, thanks to the amazing idea of then-sixth-grader Isaac Garcia. Students collected items to create “Blessing Bags” that were distributed to people who were homeless and/or in need. An article about the project called “Isaac’s Wish” appeared in The Good News Spring 2018. 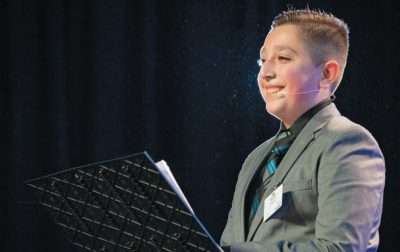 Isaac Garcia was a speaker at the Aim Higher annual fundraising event.

COS seventh grade student, Isaac Garcia, was the Aim Higher Scholar featured at the 6th annual Night of Light. The Aim Higher Foundation was established in 2011 to provide tuition-assistance scholarships to students seeking to attend Catholic schools throughout the Archdiocese. The Night of Light is the organization’s primary annual fundraising event.

“The event is the perfect opportunity to show our donors, supporters, and friends the impact a scholarship can have on a child’s life,” explained Jean

Houghton, president of the foundation. “When children can access the life-changing benefits of a school like Community of Saints, their God-given talents flourish.”

Every year, the Night of Light highlights schools and students from the 83 Catholic schools in the Archdiocese. Isaac was chosen in recognition for his volunteer work on behalf of the homeless people in his neighborhood. Isaac’s story was featured in the Spring 2018 issue of The Good News.

The invitation, while an honor, is one that would strike terror into the hearts of many adults, since it involves giving a three-minute speech in front of an audience of 500–600 people. But Isaac handled it like a pro. “Isaac was completely poised. He wowed the crowd not only with his words, but with his maturity,” reported Houghton. “He received three standing ovations during his speech. More importantly, however, he made his family and his school proud.”

The Aim Higher Foundation seeks to ensure that all children can access the life-changing benefits of a Catholic education. Since 2012, the Foundation has provided tuition assistance scholarships to more than 6,600 children—worth more than $5.1 million—to attend Catholic schools in the Archdiocese of Saint Paul and Minneapolis. 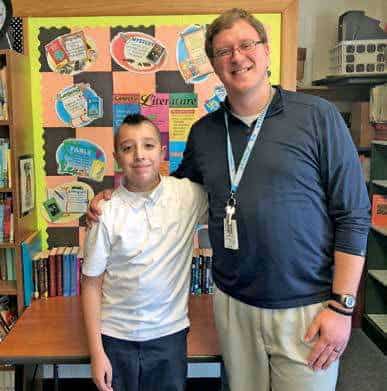 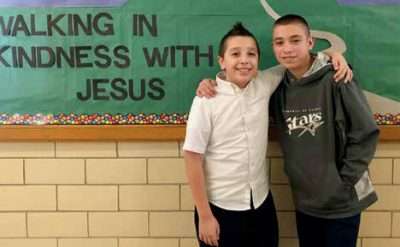 In December of 2017, COS 8th grade student Jose Garcia helped his younger brother, Isaac, every step of the way with the “Blessing Bags” project..