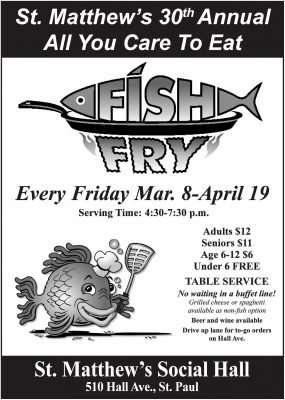 Wednesday, March 13, 8 pm, in the Social Hall. Menu – In observation of Lent we will be having snacks.

The 4th Annual West St. Paul Winter Fun Fest!
The club had a booth at this event. It was very successful, thanks to those who helped!

John Del Vecchio is going through some serious health issues. Evan Berg’s father-In law has moved to hospice. Joe Stevens brother Jim (Whiskey) passed away on February 11th, there will be a service for him May 3rd at St Matts. Greg Rasmussen’s mother Mary Ann passed away Tuesday, February 26, the services for Mary Ann were held March 1st and 2nd. Please keep these club members and their families in your prayers.

The meat raffles continue to be a consistent fund raiser for the men’s club, if you can help on Friday’s at Gallagher’s around 5pm please sign up on the sheet that will be passed around at the general meeting.

We had an issue with the cooler and had to decide on making a costly repair prior to the general meeting, we will update the issue at the meeting.

Other News and Upcoming Events

See you at the March 13th general meeting!