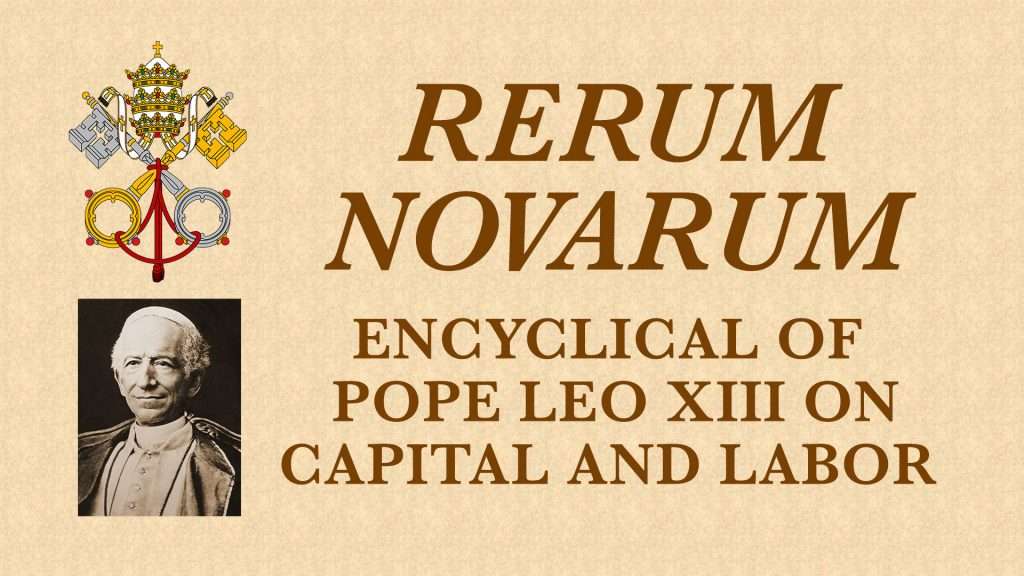 This is the 131st anniversary of Rerum Novarum.

Rerum Novarum is the Latin opening words and the title of the letter and means “On the Condition of Labor”.

Although the Encyclical follows the church’s traditional teaching concerning the rights and duties of property and the relations of employer and employee, it applies the teaching to modern conditions.

It opens with a description of the grievances of workers. It proceeds to refute the false theories of the Socialists, and to defend the right of private ownership. “The true remedy”, continues the pope, “is to be found in the combined action of the Church, the State, the employer, and the employed.”

The Church is more than interested in the social question because of its religious and moral aspects. The State has the right and the duty to intervene on behalf of justice and individual and social wellbeing. Employers and workers should organize into both mixed and separate associations for mutual protection and for self protection. All this is set forth with detail to address the principal problems and relations of industrial life – the rich became super rich and great majority were relegated to poverty. The “Robber Barons” controlled economic life in the country – one of whom was James J. Hill, the Empire Builder.

I was introduced to this church teaching by the former pastor of St. Matthew, Msgr. James Cecka – among his responsibilities he was a college teacher of history and the Church’s Social Teaching.

This writing of Pope Leo lit a fire under a young man from Vermillion, Minnesota – John A. Ryan. He became a priest of our local church and then taught at the Catholic University of America. His work on the social teaching of the church impressed Frances Perkins, who was to become the Secretary of Labor in FDR’s administration. Msgr. Ryan – home-town-boy makes good – was instrumental in the formulation of the National Labor Relations Act, the prohibition against child labor, the 40 hour work week, the Social Security Act and the living wage.

As a result, the Church became a strong support of labor unions and the protection of immigrant families. This letter of Leo XIII opened the door to the Church’s engagement in the affairs of social and economic life.