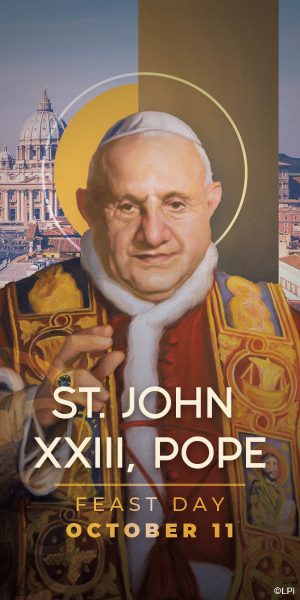 October 11th is the Feast of Saint John XXIII. This grandfatherly figure was a revolutionary. He desired to see the Church become a significant presence and voice in a rapidly changing world. On the evening of January 25, 1959, following the Solemn Vespers on the Feast of Saint Paul, he simply announced that it was his intention to convene an ecumenical (universal) church council – something that had not been done since 1870.

The purpose of the Council was not to condemn a heresy (as so often was the case with Church councils) but to explore new avenues, new approaches, a new voice to proclaim the truth of the Gospel, one that could be received and understood by a growing secular 20th century.

I was a seminary student (college and graduate school) during the time of the II Vatican Council. The discussion and the spirit of that Council, more than anything else, formed my conception of the Church and what the role of a pastor might be.

Apart from the Scriptures, it is the documents – the teaching – of the Council that have been part of my daily reading and prayer each day since 1965. The Word and Spirit of the Council marks the most significant event in the life of the Church over the past 100 years.

John was filled with great optimism and faith that the power of the Holy Spirit would create in the Church a new Pentecost. That work is ongoing.

October 11th was chosen as the feast day for Saint John XXIII because it was on October 11th, 1962 that the II Vatican Council met for the first time. I pray that John’s hope may continue to animate our Church.