You are here: Home / Messages from Fr. Bob / Touched by a Fiery Spirit (Fr. Bob reflection) 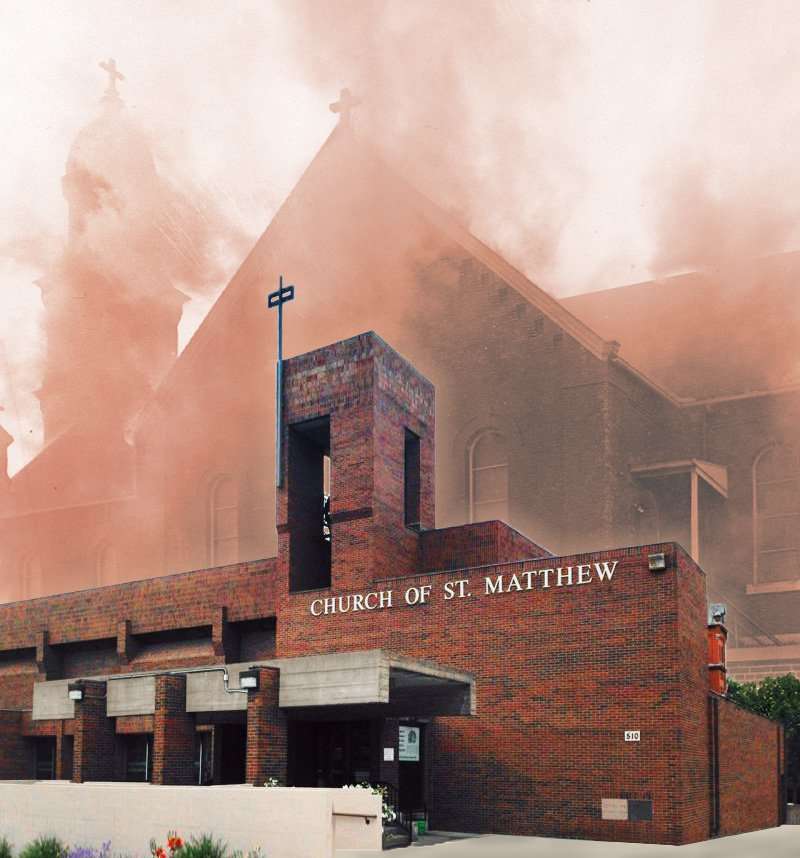 One of my favorite Peanut cartoons shows Lucy philosophizing with Charlie Brown. Lucy says, “Charlie Brown, life is like deck chairs on an ocean liner. Some people take their deck chair; face it towards the back of the ship, and think of the home they left, the past, and everything behind them. Others turn their chair to the front of the ship and anticipate what’s coming next, what new port they are going to enter that evening, and all the exciting things that are coming. Which way have you turned your chair, Charlie Brown?”

Charlie Brown lets out a big sigh and says, “You know, I can never get those darn deck chairs opened!”

In my weekly reflections from Easter Sunday until Pentecost, I invite the community at the Church of St. Matthew to reflect on Lucy’s important question. We can do this by looking at the past, then the present, to focus on the future. We will start with an article from the past written by Fr. Don Wegscheider describing the community’s recovery from the 1968 Easter Monday fire:

“People in the afternoon traffic on Easter Monday of 1968 witnessed billowing, rusty clouds of smoke from the burning 1886 (81 year old) landmark of the west side of St. Paul, St. Matthew’s Church. The firefighting equipment pulled away, leaving a gutted church structure and a parish in crisis.

Since huge problems take away one’s fear of asking advice, we elicited the help of the whole parish. One result was a brand new Parish Board with a finance and building committee—playing it by ear.

After sponsoring guided tours through the gutted wreckage of a once proud church, the overwhelming vote was to build anew. Then came the work.

We knew that building a new church would raise basic questions about the objectives of a parish. However the form of the questions took a strange pattern. One small, but significant issue, church seating, became the emotion-filled axis around which most questions were asked.

Discussion of the varied work of a parish in experience and learning of God wanting us near Him was sparked by a suggestion of a variety of seating patterns. Should we use chairs or pews? Prayer and kneeling have always been closely associated. Could chairs cause us to lose our reverence? If we could not kneel in the main church space, where could we pray privately?

The expense of bench pews prompted a look at our moral use of money in a lower middle-class community. Moveable chairs exploded our imagination with new possibilities in Liturgy. The varied use of chairs challenged those fearing Urban Renewal in a neighborhood desperately needing the encouragement of a new community building. Soon a basic principle shone through: All the uses of a church must be guided by one ideal—to preach the Gospel.

One policy we followed was that all written comments were encouraged and answered individually, no matter how small, fearfully concerned, no matter how angry or vitriolic. We conferred with resource people as the Service Club for the Handicapped and funeral directors. The Service Club pointed out the need of non-traffic space for wheelchairs and for slow walkers. The elderly are important to consider because of a large Senior Citizen complex in the next block. They were also emphatic about eliminating steps. The funeral directors noted the practicality of wide doorways and aisles and the advisability of a canopy over the entrance.

We had countless hearings and exhibitions of the plans with presentations by the Architect. To form the people we initiated many home Masses asking the question: What should Christ’s Church look like? Our reading and our Sunday sermons were coordinated around the work of the parish. Eventually the time was ripe for the vote—a vote not just on church seating, but obliquely, on parish leadership, on their priests and on their notion of parish ministry.

In this older, very stable community we risked the alienation of many who fear the new and of those who suspect the loss of the old reverence. Alienation has a frightening companion, non-support. But the risks were worth it when the emotion-filled controversy over a building detail as church seating became the channel toward important questions uncovering deeper meanings.

Four definitions uncovered by the controversy were: a) a people centered ministry, b) the parish as a social force, c) flexible liturgical prayer, and d) style of parish leadership.

Thinking in terms of a functional building for a church, we had to ask, what does a church do?” Essentially it provides space for people to hear the Word of God and keep it. The diverse media of communications used in education, advertising and vocational training led us to a basic conclusion about our ministry. The Gospel speaks of God relating to man, and man relating to God, and men relating to each other. Communicating this optimistic faith uses all things to persuade people to go to the Father through Christ. Even parish buildings exist only to communicate and experience this Good News.

We built a new building in a neighborhood ripped in an unfounded fear of the bulldozer of urban renewal. This confidence encouraged many not only to remain in there but also to expand their homes rather than move out. The West Side was the site of a great deal of redevelopment-industrial parks, high rises, public housing, parks. Consequently rumors about urban renewal flew around the area. Uncertainty was rampant, confidence in the upswing of the neighborhood was low. As a parish we were concerned.

The values of the Gospel, such as concern for others seeking peace, feeding the hungry and union with Christ seem to interfere with our lives at every turn. Essential to our commitment to these values is the sharing of them with others. God with men, and men with each other. This is what makes the church a social force. A building which is open to community uses is also open to risks, but even more, open to specific opportunities to back up our words of concern.

Any organization is meant to be used. We used the parish organization as a positive social force among other organizations and people. Consequently our ministry revealed the relationship of the church to neighborhood. All people may not be ready to talk about Jesus, but all are ready to join forces to promote neighborhood improvement.

Even though different forms of the liturgy were already prevalent the chair controversy helped us to see the importance of the sizes of liturgical groups, of the placement of the choir as a distinct, yet integral part of the congregation, of the notion of celebration in liturgy. Many people use worship as their individual tie to God. Even among singing people, they see themselves as relating individually to God. For them a reverent posture of prayer meant only kneeling. Public prayer meant only private prayer done out loud and in a group. The dynamic of people sharing insights through discussion homilies, the gesture of peace and parades of celebration fell often on deaf ears and blank stares.

The style of leadership of the newly born Parish Council was one tempered with repeated purification of motives. Confronted with suspicion, opposition and uncertainty, they were under constant examination. Unwilling to believe that they were actually decisive in their governing the parish, the members needed time and much reassurance to come of age as emerging laymen. With the growing building and the increasing confidence of the people, they came to see themselves as a team striving for consensus in bringing the Gospel to themselves, the Church of St. Matthew.

A fiery spirit? the Holy Spirit? a new Pentecost? Who knows? I think so. What else could it be?”