You are here: Home / Messages from Fr. Bob / Who We Are Becoming (Fr. Bob reflection) 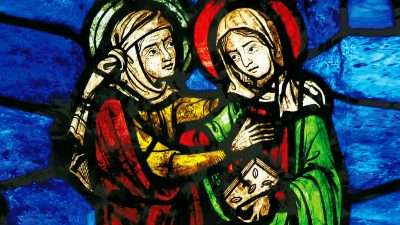 As Christmas Day approaches the stories surrounding the birth of Jesus as well as the nativity story itself are depicted in creche scenes, television programs, school plays, Christmas cards, sacred hymns, and popular songs. But there is much, much more to the stories of Christmas than what immediately meets our eyes and ears.

In the gospel story for the Fourth Sunday of Advent, Mary and Elizabeth meet and visit without the presence of any male characters other than their unborn infants. Given the rare occurrence of “women only” stories in the scriptures, it is all the more significant that the writer of Luke’s gospel begins the first two chapters of the gospel with Mary going to see Elizabeth and ends the last chapter with women going to the tomb on Easter morning. We are given a version of Jesus’ life from a woman’s perspective. So what do Mary and Elizabeth tell us through their visit?

Elizabeth was an elderly woman beyond childbearing age. She was married to Zachariah an elderly man who represented the masculine, conventional, priestly tradition of Judaism. Being struck silent when he found out his wife would bear a child means that the old beliefs of Judaism rooted in a biased patriarchal society were being challenged. Elderly Elizabeth did not regret her pregnancy but rejoiced in the birth of her son. She represents the open, trusting, qualities of women. When Elizabeth names their child “John” and Zachariah agrees, conventional Judaism receives an abrupt wake-up call that changes are taking place.

Mary was a young woman just at the childbearing age. Through her and the power of the Holy Spirit God was entering the world not only with a new message but also in a completely new way. Through Mary, God was visiting the people and the divine message that is proclaimed throughout history is being developed.

As Advent comes to an end, we celebrate Christmas Day, and look forward to the New Year, the story of Jesus Christ, Mary, and Elizabeth invites us to treasure who we have been, who we are, but most importantly who we are becoming. We too are part of the story.